I am brand new and green as grass on this topic, but had seen the fountain at Disney World and read a few things years ago about laminar flow. When I first saw instructions for the DIY units, I was surprised that the flow reduction just before the actual nozzle was not tapered in any way. It just seems logical to me that a curved tapered transition would give a smoother flow than an immediate drop from a 8" diameter cylinder to a 0.5" nozzle. Obviously I am not the only person to have considered this, and so I conclude that my logic is faulty. Can one of you experienced builders explain what goes on in that last transition after the straws and before the little sharp-edged hole? 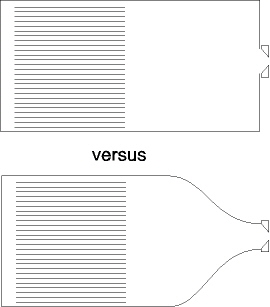 I haven't found an answer yet on internet. This is what I have understood so far. The function of the straws is limited to stopping screw-like motions of the water. In the theory of laminar flows, the water streams in coaxial cylindrical layers, the outer one with the lowest velocity (zero) and the middel one with maximum velocity. In the jets that we produce, the outer layer with different velocities is very, very thin, and the velocity in the middle is almost everywhere the same. The nozzle edges have to be sharp, because the velocity of the outer layer should be preferably not zero and equal to the velocty of the inner layers. I don't know if this is correct. The next step is to think through what the influence could be of the shape of the tube.

Maybe I can explain

I haven't built one yet but since I am an Engineer, perhaps I could shed some light on the subject. First off, you must understand that there is no practical way to entirely be free of all turbulence.  With that said, the design of the nozzle gets you as close as can be expected at the discharge of the nozzle.

Any time you have a fluid moving through a vessel, pipe, or any other contraption, friction is at work. The velocity of the outermost layer is the lowest in the flow. The next layer in is also slow but to a lesser extent than the outermost boundary. The flow becomes faster the closer you get to the centerline. The flow profile is in the shape of a bell curve. This trait is caused by the viscosity of the fluid, but the original source of the uneven flow is drag.  Drag is a function of velocity of the flow relative to the static vessel or pipe walls. Although this uneven flow is not technically turbulence, it prevents an ideal laminar flow.

So to accomplish less drag, the velocity of the fluid must remain low. This is afforded by injecting the fluid into the nozzle chamber which is much larger in diameter to the pump line. The fact that the inlet is perpendicular to the nozzle outlet only helps to prevent stream-ward impulses. The fluid is still flowing at the same rate, but since the cross-sectional area is much larger, the velocity of the fluid is much lower and therefore is less drag. The screens and straws arrest any vorticity in the fluid to prevent a low pressure vortex at the outlet at the cost of some minor added turbulence which is diffused in the dead space prior to the nozzle outlet.

Here is why the nozzle reduction is the way it is. If you are looking at the flow profile in that dead space, it looks similar to most pipe flows: low on the outside higher in the middle. Although the bell curve is subtle and more umbrella like, it is still not entirely laminar. However, if you only look at the half inch core of fluid as opposed to the entire tube, the flow is very close to completely laminar. Since the large area is stopped at the baffle, the half inch core accelerates fairly evenly and leaves the nozzle. The amount of drag at the outlet is minuscule since the surface interaction area is blade thin. BTW, your outlet on the drawing above is on backwards.

Lets entertain the smooth reduction scenario. In that case, the process is the same leading up to the dead space and then things change drastically. As the fluid collides with the funnel, this creates hydrodynamic pressure points in the fluid and increases the normal force of the vessel which leads to increased drag and lateral flow elements which increases turbulence. Lateral movements is exactly what you want to avoid. Lets assume for argument that this has negligible effect, as you slowly reduce the diameter of the vessel the bell curve flow profile becomes smaller and if you are only considering the laminarity of that half inch core of fluid as the diameter of the entire vessel decreases all the way to half an inch, the flow becomes that bell curve again. Furthermore, the velocity and therefore drag is increasing throughout the entire reduction.

So why is it that intuition tells you that the smooth reduction makes more sense? Because it is used a lot in high flow applications. Granted, the smooth reduction would make flow more effortless. The pump would not have to work as hard to get the same flow rate. But that is not the objective we are after in building these nozzles. The flat baffle design creates higher hydrostatic pressure differentials which places more load on the pump. But it does so at the benefit of near ideal laminarity and a glass like tube of water.

I hope that helps a little. Let me know if I was unclear.